October 25, 2013
In this blog post you will learn a new feature ‘Custom Code First Conventions’ introduced with Entity Framework 6. This is 'Code First' only improvement. EF 6 comes with number of cool new features and improvements, so I decided to write blog posts and cover some of the new features.

I am going to split this post into two parts. In the first part I will show you the basic things on ‘Setting-up Console Application’ and in the second part we will use this newly created console application and try out this cool new feature ‘Custom Code First Conventions’ in EF 6. Clearly, I am targeting beginners here, so if you understand how EF works or if you use EF frequently you should jump to ‘Custom Code First Conventions’ point in this post.

In order to do database work with Entity Framework, we need to have a model class. Right click on project name to add a class by name ‘State.cs’ and write following codes.

Install the EntityFramework bits either from package manage console or from NuGet. Let’s use package manager console and type following command.

Hit enter, it will install the latest available EF library, which is 6.0.1 as of now, in the project. 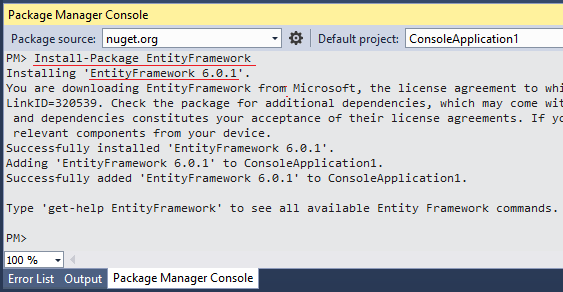 In above step we installed EF6 bits in the project, now we are ready to use EF as an ORM. To work with DbSet and DbContext, we need a class file, add a new class file by name ‘StateContext.cs’ that inherits DbContext and also write two DbSet, one for ‘State’ and another for ‘District’ models, here is the code.

In the above code, I have created two DbSet, one for State and another for District.

In above code we are trying to see the list of States but unfortunately we do not have any record for States or Districts in the database, so it is obvious it will show you nothing. But it will generate a brand new database for you once you run. You can see it inside LocalDb list. 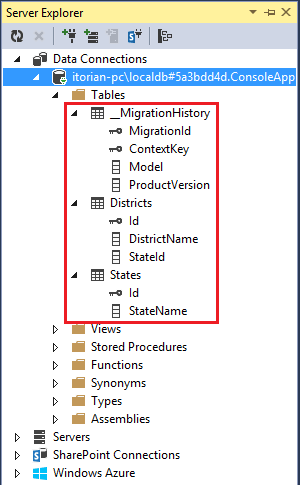 Let’s go and enter some records manually in States and Districts tables or we could use ‘EF Seed method’ to do it automatic, if you want to learn this I have a blog for this also Entity Framework's Database Seed Method.

Well, I have entered following records manually just to save time and keep codes simple.

In above step we entered database records manually, let’s run the application to see how it works.

In the above output you can see all the States are listed.

Now, we have a ready to run Console Application, where we will try out this new feature ‘Custom Code First Convention’.

Code First - this is an alternative to ‘database first’ and ‘model first’ approaches to create database.

Now, mix every segment together and try to understand it.

Configuration Conventions are the way to configure set of objects without overriding configuration provided by Fluent API. We can define this convention inside OnModelCreating method or we can use own class that inherits Convention class.

Entity Framework Team worked on a most requested feature to set the precision of all decimal properties in their model. Assume, we want all properties with decimal datatype on all entities should be configured to have a precision of 5 and a scale of 2

To achieve this with Configuration Conventions, we can use following code.

Look at the highlighted code, this code creates a convention that tells EF that all properties on all entities should be configured to have a precision of 5 and a scale of 2.

This can be conceptualized as the Properties method returning a list of all properties in your model. The parameter <decimal> then filters all properties to only be those that are of type decimal, and finally you call configure. Configure method is where we decide what to do with all the properties that we have filtered out in the preceding method.

So far we don’t have any decimal property in the model, let’s add a new property in State model.

When you execute update-database command of Code First Migration. This will go and update the database and you will see StateFund field with decimal data type of size (5, 2), super.

You can see it is working.

Another example of Configuration Conventions is when you want to define a different primary key convention. By default EF convention looks for either ‘Id’ or name followed by ‘Id’ as a Primary Key. Assume, we want all properties on all entities that end with ‘Key’ (like StateKey or DistrictKey) to be a primary key or something similar without using [Key] annotation with property. Look at the model given below, I’m using ‘StateKey’ as a Primary Key.

Delete ‘Id’ and ‘StateKey’ with [Key] annotation, just keep last ‘StateKey’ property. Now, in order to run this we need to create ‘Configuration Conventions’, for this we can use following code.

Look at the highlighted code, this code creates a convention that tells EF that all properties on all entities, which ends with ‘Key’ should be considered as Key (Primary Key).

Note: If you just striped the [Key] annotation from already running application, don’t need to execute ‘Update-Database’ command as given below.

Error 1 - Here is the error I got inside Package Manager Console:

I encountered this error when trying to execute ‘Update-Database’ command and the scaffolded migration script class [which has Up() and Down() methods] failed to arrange drop/add/create/rename job order.

Error 2 - If you again do ordering in a wrong way, you will see another error very similar to one given below.

The object 'PK_dbo.States' is dependent on column 'Key'.
ALTER TABLE DROP COLUMN Key failed because one or more objects access this column.

Now, to make this migration (scaffolded migration script class) work. We have to arrange jobs this way. In the image, green sign is a valid way and red sign is a wrong way. 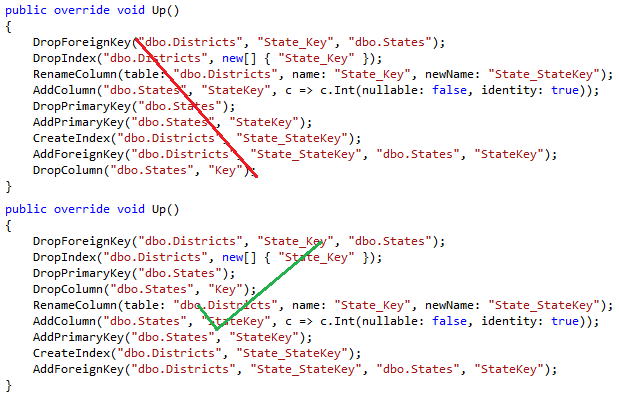 Once we made order correctly specially Drop the ‘key’ before adding new ‘key’, and it worked. 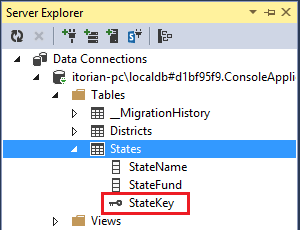 I don’t know is it a template bug or I am doing things in a wrong way, if you know please share.

Look at the highlighted code it is self-explanatory. Now, add a new migration and update the database, you will see your database table got updated with new field names having _ (underscore) sign. 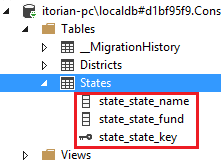 I am not necessarily suggesting that this is good database design, but this is the convention we have to follow, and this is a good new feature we should learn. Keep in mind, I did not made any changes in actual model, it is still as it was above. Here it is:

And it will work.

Let’s look at one better example, assume we want to change size of all nvarchar from ‘MAX’ to 50, so here ‘Custom Convention’ will help you as well. Here is a screenshot.

And here is the simple code.

Now add a new migration and update the database, you will notice the database got updated as given in above image.

So, this is all I wanted to show in ‘Custom Conventions’ using OnModelCreating method. These conventions can be also achieved using separate class, how? Keep reading.

All the examples (Example 1, Example 2, Example 3 and Example 4) I shown above can be done with separate classes that inherits Convention class. Here is one example.

Now we need to call it from OnModelCreating method of DbContext.

So, this is also easy. You can use any of the way (using OnModelCreating or using Custom Convention with class) for your Custom Code First Conventions. Excited to learn more cool new features, subscribe the feed.

I will post a separate blog on this soon.

August 31, 2012
Consolidating all blog posts monthly are very refreshing as it gives me chance to go back and see what I did in last month and for readers gives the chance to see what he not followed up.

In this blog post I am going to cover some really interesting stuff which is very useful today in web application developments. You will learn how to make jQuery Ajax GET and POST calls to controller methods.